Five On Friday - The One Where I Show My Legs

Suzi of Alternative Ageing recently wrote a brilliant post about older women wearing shorts.  Being 55 and having less than perfect legs.... scars, wobbly knees, varicose veins and no ankles, (according to a former boyfriend!) I wear shorts on holiday, where nobody knows me, but I've never worn them to pop out to the shops say, or down the pub at home.  That changed a fortnight ago when temperatures reached the high 20's for a few days.  I was wearing my shorts around the house and needed to pop out, I couldn't be arsed to change and as I'd slapped some fake tan on a few days earlier I didn't think my legs could be too offensive ....could they? 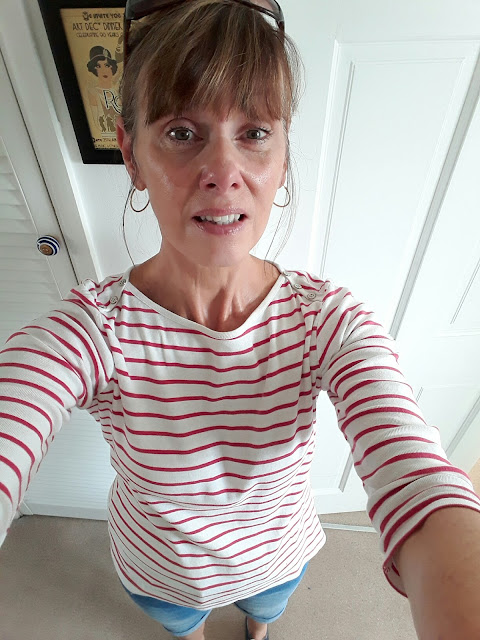 I need longer arms or a selfie stick...note the return of the 'Deidre' neck! 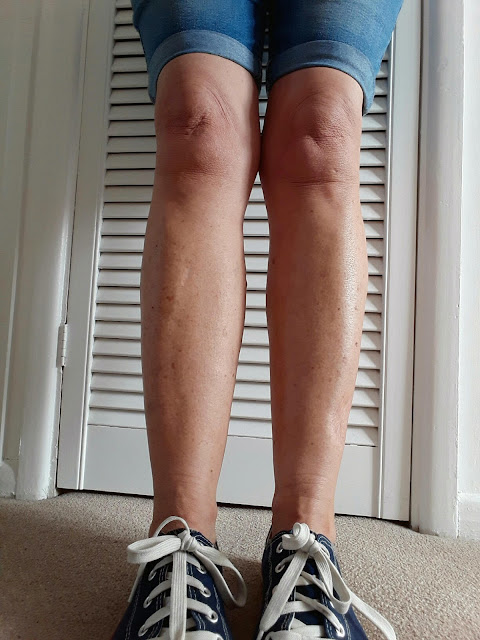 Anyway, after a liberating trip to Screwfix, where no one gave my legs a second glance I've decided I'll be wearing shorts again and bollocks to anyone who thinks they are 'age inappropriate' (dreadful phrase) or vulgar as my pins aren't perfect.
Do you wear shorts? Let me know in the comments what you think.

Something I wouldn't been seen dead in, in public (unlike some Tesco shoppers) are pyjamas!  These Sainsbury caravan 'jamas were bought for sleeping in. 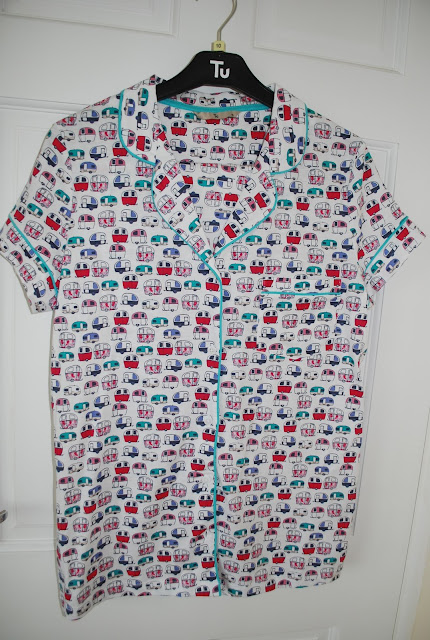 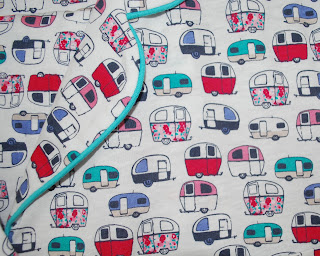 I couldn't resist them and thought they'd be just the thing to take to my van... in spring and autumn it can get un peu chilly at night.


After a summer of shite and shows featuring sex-mad millennials on TV I was more than pleased to see the return of Inspector Montalbano. 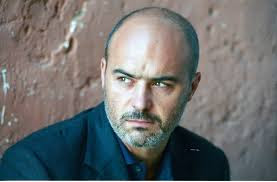 The Sicily portrayed is stark and sparsely populated (where are all the tourists?) but the skies are blue (always a mood lifter when you live in the UK) and Dottore is not bad either !  Subtitled, it's screened on BBC4 on Saturday nights. I need to catch up with last week's episode as I fell asleep whilst watching it, being rather jaded after an eventful day at 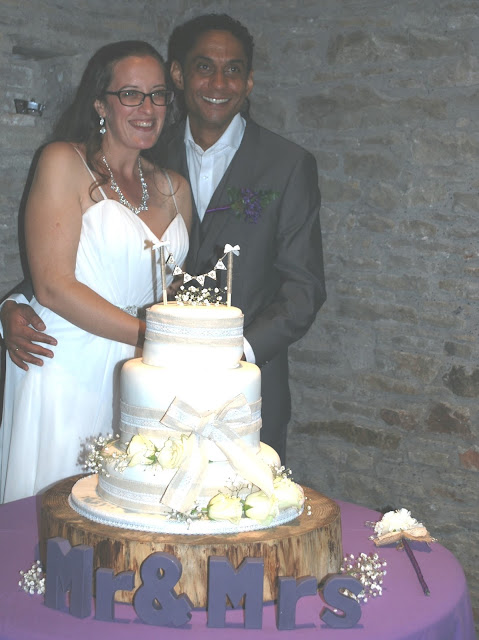 I travelled across to Bristol last weekend for the marriage of Christopher and Emily.
I gave a reading during the ceremony, mingled with guests whilst photos were taken, then stupidly cut myself rather badly on a glass between my thumb and index finger.  Fortunately there were lots of guests with medical training...a cardiologist, an anaesthetist two SRN nurses, an armed response policeman and a 999 call operator!  The general consensus was that I needed stitches, so unfortunately I missed the meal, speeches and happy announcement that two will become three early in the new year, as I was sat in Cleveden Minor Injuries Unit.  The staff there were marvellous and after a short wait I was steri-stripped, bandaged and on my way back to the wedding in a taxi, being entertained en route by the driver, whose previous occupation involved touring with pop stars. By the time I was deposited back at the venue he'd furnished me with the name of the biggest bitch in the industry.
I don't have many photos of the occasion as I was absent for quite a while, but here I am at the end of the day with my cousin, (the bridegroom's sister) Vanessa. 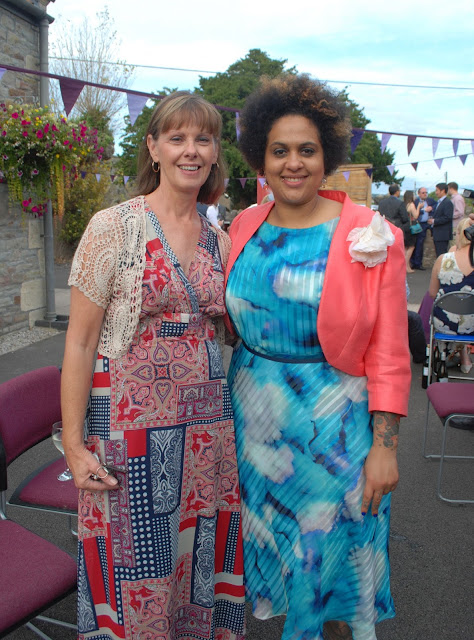 Fortunately I've done no lasting damage and was able to drive home. 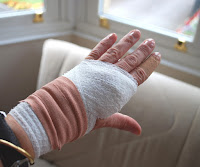 I did remark to my family that there weren't many presents left at the wedding venue and was told this was due to the online wedding list, as the retailer delivers them straight to the couple's address. (I'm so last century!)  No impersonal present from me thanks very much, I gifted them some unusual Mr & Mrs mugs and personalised teaspoons 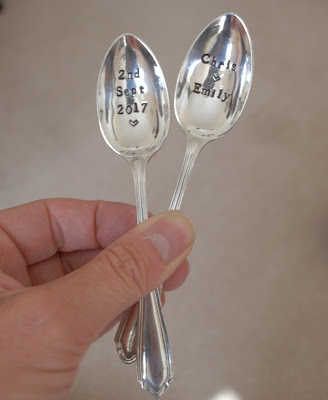 I also put together this idea that I shamelessly stole from Pinterest and wrapped the lot in brown paper tied with vintage lace. 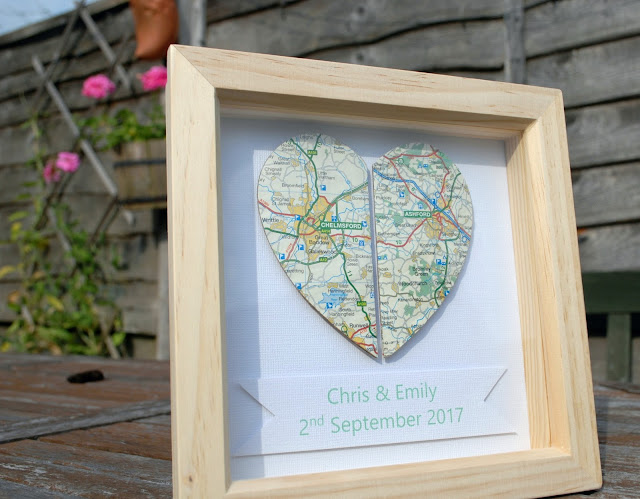 Last week a friend suggested a trip to The Depot in Lewes which screens French cinema, so it goes without saying that I was up for it.  We saw Back To Burgundy, (Ce Qui Nous Lie in French - What Binds Us) which tells the story of three siblings reunited when their vigneron father dies and leaves them his vineyard.  It wasn't the best French film I've seen and I tend to agree with The Guardian review here that it lacked depth and drama, nevertheless it was a pleasant enough film and the vistas of the French countryside were glorious.


So that's what I've been up to recently, how about you?
Linking this post to Tricky's Five On Friday. 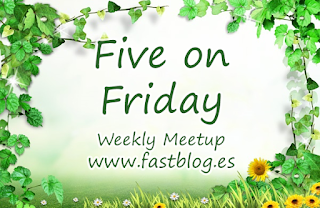